We have exciting news!  We would like to announce the grand opening of a new audiovisual integration firm in the Greater Orlando area.  Chet Neal brings you, RelianceAV.

When you work with, or for, Chet Neal you hear the sentence “I don’t know, ask Chet” all day. That is the sign of someone that knows his craft. Chet has been in the AV industry in some form since his college days when he was the sound engineer and stage manager of Ohio University’s Memorial Auditorium. His professional career took him to Disney where he worked first as an audio tech at Pleasure Island, then as the tech manager of Animal Kingdom’s opening crew.  After, as he says, “the pixie dust wore off”, he found himself in Integration where he’s built an impressive reputation of not only being extremely knowledgeable, but also easy to work with and an all-around good guy.

So, when you are looking to install, update or give your Audio Visual System a tune up, you too can simply, Ask Chet, Founder & President of RelianceAV 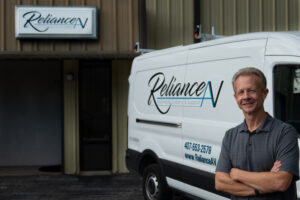 The Ribbon Is Cut & The Doors Are Open!